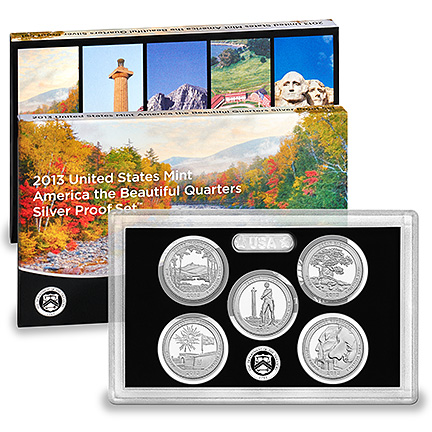 Perry’s Victory and International Peace Memorial
The reverse design depicts the statue of Master Commandant Oliver Hazard Perry with the Peace Memorial located in the distance.  The memorial is one of the tallest of its kind in the U.S.  Inscriptions are PERRY’S VICTORY, OHIO, 2013, and E PLURIBUS UNUM.  The reverse was designed and executed by United States Mint Sculptor-Engraver Don Everhart.

Great Basin National Park
The reverse design depicts the beauty and unique qualities of a single Bristlecone Pine tree and the rocky glacial moraines where the trees grow.  These trees grow at higher elevation in the park and are some of the world’s oldest.  The park contains numerous Bristlecone Pine groves with trees older than 4,000 years.  Inscriptions are GREAT BASIN, NEVADA, 2013, and E PLURIBUS UNUM.  The reverse was designed by United States Mint Artistic Infusion Program Associate Designer Ronald D. Sanders and executed by United States Mint Sculptor-Engraver Renata Gordon.

Fort McHenry National Monument and Historic Shrine
The reverse design represents the site during the “Defenders Day” celebration, considered the centerpiece annual event held at Fort McHenry.  The fireworks symbolize the “rocket’s red glare,” linking the fort to its historic past.  Inscriptions are FORT McHENRY, MARYLAND, 2013, and E PLURIBUS UNUM.  The reverse was designed and executed by United States Mint Sculptor-Engraver Joseph Menna.

Mount Rushmore National Memorial
The reverse design was inspired by photos of men who are adding the final details to Thomas Jefferson’s face.   Mount Rushmore was featured on three 1991 Mount Rushmore Golden Anniversary Commemorative Coins and on the 2006 South Dakota quarter issued under the 50 State Quarters® Program.  This new design is distinctly different and offers a unique and educational perspective on how Mount Rushmore was created and sculpted.  Inscriptions are MOUNT RUSHMORE, SOUTH DAKOTA, 2013, and E PLURIBUS UNUM.  The reverse was designed and executed by United States Mint Sculptor-Engraver Joseph Menna.

Coins in the America the Beautiful Quarters Program have a common obverse (heads side) design that features John Flanagan’s 1932 portrait of George Washington that was restored to bring out the subtle details and beauty of the original model.  Inscriptions on the obverse are UNITED STATES OF AMERICA, LIBERTY, IN GOD WE TRUST, and QUARTER DOLLAR.

The multi-year United States Mint America the Beautiful Quarters Program is authorized by the America’s Beautiful National Parks Quarter Dollar Coin Act of 2008 (Act) (Public Law 110-456).  The Act directs the bureau to mint and issue 56 circulating quarter-dollar coins with reverse designs emblematic of a national park or other national site in each state, the District of Columbia and five U.S. territories – Puerto Rico, Guam, American Samoa, the United States Virgin Islands, and the Commonwealth of the Northern Mariana Islands.  The quarters are being released in the order in which the featured sites were first established as national parks or sites.  The designs will rotate five times each year through 2020, with the final coin being released in 2021.